"CBD" comes from the word "cannabidiol," which is a substance extracted from the cannabis plant. This substance can be infused into products or inhaled on its own and has been found to have soothing effects on a variety of conditions like sleep disorders, anxiety, pain, and inflammation. It is always recommended to see your doctor for medical treatment of these conditions, as CBD products are not medical cures. CBD is the second most common cannabinoid found in cannabis. We have worked with leading breeders from around the country to develop Hemp strains that are extremely concentrated in CBD and contain less than .3% THC.

The 2018 Farm Bill legalized the production and sale of hemp, and it’s extracts. Hemp, by federal law cannot contain more than 0.3% THC. Anything with more is classified as marijuana and, therefore, considered a schedule 1 drug by the Drug Enforcement Administration and is federally illegal. All of our products conform to FDA regulations. None of our products contain more than .3% THC.

How is CBD different from marijuana?

Even though it comes from the same plant, CBD is different from marijuana because CBD contains only trace amounts of TCH. TCH is the compound that creates the marijuana “high” due to its psycho-active nature. The tiny amount of TCH in CBD products is not enough to create that “high.”

Is the CBD made in a lab or grown organically?

Here at Hope CBD, all of our CBD products are not just grown, but grown organically. This means our CBD plants are grown without the use of any water-soluble, synthetic fertilizers, pesticides, or herbicides. Farming organically leads to authentic CBD without any additives non-organic farming practices can leave behind. It also is healthier for the soil we plant in, as organic practices prevent erosion and makes it easier for the soil to retain water.

Do the ingredients involve anything unrecognizable?

None of our products contain strange or unrecognizable ingredients. The only product that isn’t organic is the candy because we have to use coloring.

Organic CBD is grown without the use of any pesticides or other chemicals. This means there are no toxins or harmful chemicals in any part of the process of creating CBD products. Additionally, organic CBD like ours is more nutrient-dense and beneficial to your health, as synthetic chemicals can actually sap vitamins and minerals from the soil in which the hemp is grown. This makes organic CBD more effective for your needs.

CBD cannot get you high. Some people report a kind of relaxed or euphoric effect. CBD may help you feel relaxed or less anxious, but you won't get “high” if you choose to use a CBD-infused oil, tincture, edible, or other product. The tiny amount of TCH in CBD products is not enough to create that “high.”

Is CBD an addictive substance?

While current scientific evidence suggests that heavy cannabis use may increase the risk of dependence in some people, CBD by itself does not appear to be addictive. CBD is a naturally occurring compound found in cannabis.

Who can take CBD products?

Everyone is unique. Due to the nature of how naturally-derived cannabinoids work within the human body, CBD is known to possibly have a slightly different effect on each person who takes it. It can be helpful to consult with your doctor about whether you would be a good fit for CBD product use.

What types of CBD products are available?

There are many different forms of CBD products, but the two largest groups are CBD Topicals and CBD Edibles. Topicals consist of creams, salves, lotions, and oils, and are designed to be applied and absorbed through the skin. Edibles are products designed to be ingested and taken orally. They can be derived in many forms including pastries, candies, capsules, and drinks.

How do I use CBD oil?
What form of CBD should I take?

With the correct research in advance and a conversation with your doctor, you will have a better idea of which form of CBD you will most benefit from. There are plenty of commercially-available products crafted with high-quality CBD, and each product has its advantages. Using an effective CBD strategy for you is essential to getting the most out of these products, and it may take some trial and error before you find what works best.

How do I use CBD oil?

CBD oil can be administered in a few different ways. Your doctor will help you figure out which is the best method for your needs. You can add CBD oil to your food or drink, or you can place a few drops under your tongue. CBD oil can also be vaped, or it can be added to lotions for you to apply topically to help with a localized area of pain.

All of our Hemp is grown at our farm in Colorado. We never use any chemicals, herbicides, or pesticides at our farm. All of our ingredients are sourced from suppliers here in the USA

Yes, all of our products are tested by an independent 3rd party lab. Botanacor Labs is one of the only FDA and Colorado Certified Labs for Hemp products.

Yes, we are an agriculturally responsible company. We only use organic and sustainable farming methods. Some techniques we use include cover cropping previously farmed fields to allow the soil to rejuvenate. We have a composting program using previously extracted plant material, other organic matter and manure that is supplied on our farm from the chicken and egg farming operations.

How often do I want to take CBD?

It all depends on your body and what you’re taking it for. Just like there is no perfect time of day to take CBD, there is no one perfect schedule that works for everyone. Some prefer to take it daily to perpetuate regular CBD levels in their bodies. Others prefer to take it as needed so it maintains its effectiveness in treating certain conditions. When all these components are accounted for, the timeframe ranges from a few days to a couple of weeks.

Consult your doctor for proper dosages and a timeline for use.

Does the CBD company provide a secure buying experience

Yes. We do not keep any customer credit card information on file and we will never sell your information.

What serving size is right for me?

The serving size of CBD you should be taking depends on a range of personal factors, including:

In other words, there are many variables that go into deciding your serving size of CBD. Before trying any CBD products, make sure you talk to your doctor about an appropriate dosage and any potential risks. If your doctor tells you how much to use, stick to their recommendation. This is important especially if you are currently taking any medications that could conflict with CBD.

Why should I take CBD?

There is some encouraging research and informal evidence that CBD may help with the following, although clinical research is still unscientific. You should discuss any health issues and natural supplementation with your physician.

One of the main effects people notice with CBD products is it’s great for anxiety. It just helps to keep you calm and focus. Many people benefit from taking the 500mg Tincture for general help dealing with anxiety and like the candy for an emergency anxiety attack.

Cbd has been found to help people with neuropathy issues by helping to reduce the inflammation in those nerves and providing a natural pain reliever. People with neuropathy claim that several cannabis products, including inhaled herbal cannabis, sprays, and tablets, are effective. Tinctures, Capsules, or candy are said to be the most effective in providing whole body relief.

It’s hard to say if CBD oil can alleviate cancer symptoms or cancer treatment side effects, because the studies are pretty mixed and even fewer are standardized. There have been reports that cannabinoids like THC and CBD may be helpful for nausea and vomiting and anorexia, as well as neuropathy, anxiety, depression and insomnia. Synthetic cannabinoids like dronabinol have been approved for use with chemotherapy-induced nausea and vomiting, but have not been shown to be superior to conventional anti-nausea medications.

There is a mounting body of evidence indicating the effectiveness of pure cannabidiol (CBD) and CBD-enriched Cannabis sativa extract (CE) for the treatment of autistic symptoms in refractory epilepsy patients. There is also increasing data support for the hypothesis that non-epileptic autism shares underlying etiological mechanisms with epilepsy.

There have been a large number of studies, one of the earliest being from 2016, about the positive effects CBD can have on individuals diagnosed with Epilepsy and who suffer from Seizures.

CBD has shown promise in initial studies as a treatment for both depression and anxiety, and it may cause fewer side effects in some people. The findings from a 2014 study on this subject reported that, in most studies, CBD appeared to have a positive interaction with serotonin receptors in the brain. Serotonin impacts a range of functions in the body, including a person’s emotional state and feelings of well-being or happiness. Keeping serotonin levels balanced is often a key therapy for people with depression.

Research also suggests CBD is anti-microbial, with some data showing it works about as well as antibiotics to kill Staphylococcus aureus. Staph can infect the skin of people with atopic dermatitis, triggering flares and other complications.

There are very few studies of topical CBD in people with eczema. A small study published in 2019 in Clinical Therapeutics that included a few people with atopic dermatitis found that a CBD ointment helped clear skin and reduced itch and the sleep loss it caused.

Cannabis compounds such as CBD are known to modulate the immune system. They act as regulators, bringing an over or under-reacting immune system back on track. However, it’s difficult to tell the difference between “immune-modulating” and “immune-boosting.” It’s commonly agreed that people with autoimmune conditions are better off without taking anything which boosts the immune system.

CBD contains many compounds with oil-reducing, anti-inflammatory, and antimicrobial properties that may help improve acne. Also, while sebum helps protect our skin, excessive sebum can also result in acne. The study indicates that CBD can prevent sebocytes from creating too much sebum.

Some research suggests that taking CBD immediately after a traumatic event might make it more difficult for the brain to form the memories that may develop and cause PTSD symptoms.

Along with the above mentioned health benefit research, other researched based benefits include:

Send us a message

Have something you want to tell us? Looking to keep in touch and updated on the latest products? Have a testimonial? Just fill out the contact form and label the subject line with Contact, Mailing List, or Testimonial and we'll be in touch!

If you're more of a direct contact type person, just hit the mail or phone link below! In most cases we respond within two business days. 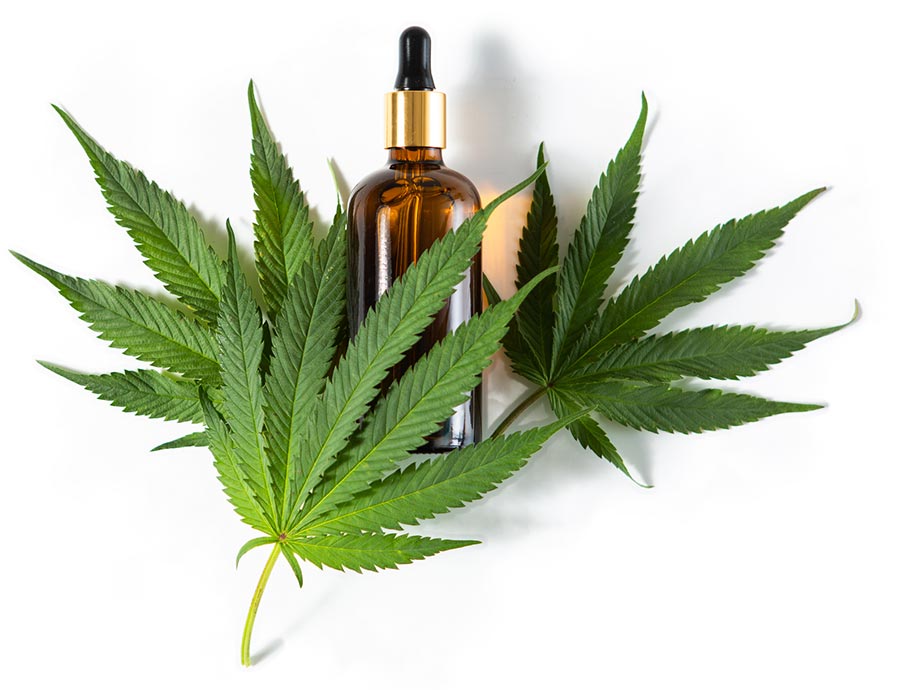 By clicking "ENTER" you verify to us that you are at least 21 Years Old.